Wyrd Sisters: Book 2 in the The Witches arc. 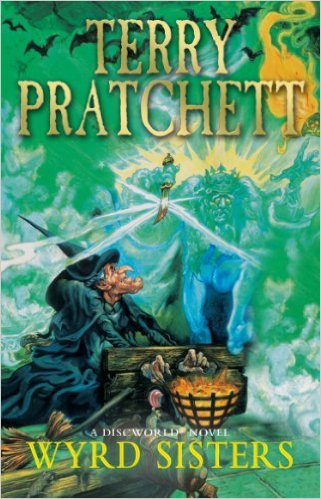 Things like crowns had a troublesome effect on clever folks; it was best to leave all the reigning to the kind of people whose eyebrows met in the middle.

Three witches gathered on a lonely heath. A king cruelly murdered, his throne usurped by his ambitious cousin. A child heir and the crown of the kingdom, both missing…

Witches don't have these kind of dynastic problems themselves – in fact, they don’t have leaders. Granny Weatherwax was the most highly-regarded of the leaders they didn't have. But even she found that meddling in royal politics was a lot more complicated than certain playwrights would have you believe, particularly when the blood on your hands just won't wash off and you're facing a future with knives in it...

Wyrd Sisters features three witches: Granny Weatherwax; Nanny Ogg, matriarch of a large tribe of Oggs and owner of the most evil cat in the world; and Magrat Garlick, the junior witch, who firmly believes in occult jewelry, covens, and bubbling cauldrons, much to the annoyance of the other two.

King Verence I of Lancre is murdered by his cousin, Duke Felmet, after his ambitious wife persuades him to do so. The King's crown and child are given by an escaping servant to the three witches. The witches hand the child to a troupe of travelling actors, and hide the crown in the props-box. They acknowledge that destiny will eventually take its course and that the child, Tomjon, will grow up to defeat Duke Felmet and take his rightful place as king.

However, the kingdom is angry about the way the new King is mistreating the land and his subjects. The witches realise that it will be at least 15 years until Tomjon is able to return and save the kingdom, but by then irreparable damage will have been done. Granny Weatherwax, with help from the other two witches, manages to cast a spell over the entire kingdom to freeze it in time for 15 years. Meanwhile, the duke has decided to have a play written and performed that portrays him in a favourable light and the witches in a negative light. He thinks this will cause the witches to lose their power, and the people will like him. He sends the court Fool to Ankh-Morpork to recruit the same acting company that Tomjon was given to, which now resides in the Dysk Theatre on the river Ankh.

The company make their way to Lancre, and perform the play for the King as asked. However, Hwel, the playwright, maintains that there is something wrong with the plot of the play, something that just doesn't feel right. The witches cast a spell in the middle of the play that causes the actors to portray the killing of the king truthfully, and the audience sees that the Duke and Duchess are guilty of killing Verence I. Felmet finally succumbs to insanity and stabs several people with a retracting stage dagger, before tripping and falling to his death in the Lancre Gorge. The Duchess is imprisoned but manages to escape, only to be killed by a collection of various forest animals who want revenge for the poor treatment of the land.

Granny Weatherwax explains that Tomjon is the rightful king, and he is due to be crowned. However, Tomjon does not want to be king; he is an extremely talented actor and wishes to continue his career with his adopted father, Vitoller. Instead Granny Weatherwax tells the town that the Fool is in fact the king's son from another mother, and Tomjon's half-brother, and he is crowned King Verence II of Lancre. Later on, Granny and Nanny reveal to Magrat that the previous fool is actually Tomjon's and Verence II's father. The status of Magrat and Verence II, who have been awkwardly courting throughout the story, is not fully explained in this conclusion.