Witches Abroad: Book 3 in the The Witches arc. 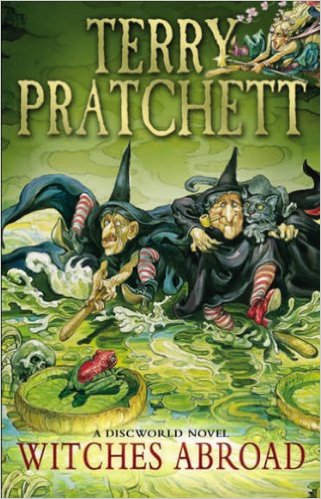 'Things have to come to an end, see. That's how it works when you turn the world into stories. You should never have done that. You shouldn't treat people like they was characters, like they was things. But if you do, then you've got to know where the story ends.'

It seemed an easy job... After all, how difficult could it be to make sure that a servant girl doesn't marry a prince? Quite hard, actually, even for the witches Granny Weatherwax, Nanny Ogg and Magrat Garlick. That's the problem with real life – it tends to get in the way of a good story, and a good story is hard to resist. Servant girls have to marry the prince. That's what life is all about. You can't fight a Happy Ending, especially when it comes with glass slippers and a Fairy Godmother who has made Destiny an offer it can't refuse.

Following the death of the witch Desiderata Hollow, Magrat Garlick is sent her magic wand, for Desiderata was not only a witch, but also a Fairy Godmother. Having given the wand to Magrat, she effectively makes Magrat the new Fairy Godmother to a young woman called Emberella, who lives across the Disc in Genua. Sadly, Desiderata does not give Magrat any instruction on the use of the wand, so pretty much anything that Magrat points it at becomes a pumpkin. This leaves several animals around Magrat's cottage now as pumpkins, one of which still thinks it is a stoat. Desiderata had promised Emberella previously that she will not marry the Duke, who's really a prince/frog. and now it is up to Magrat and her companions (Granny Weatherwax and Nanny Ogg) to ensure that Emberella does not marry the Duke, despite the desires of another Witch in Genua called Lily, Desiderata's counterpart. She used the power of her own reflection to capture Genua.

The journey to Genua takes some time and involves numerous mis-adventures, such as an encounter with a village terrorised by a Vampire - Greebo catches it in bat form and eats it - an incident where they encounter a Running of the Bulls-like event, a house falling on Nanny's head which she survives thanks to her hat with the willow reinforcement. Upon arrival in Genua, Magrat goes to meet Emberella, whilst the two older witches meet Erzulie Gogol, a voodoo witch and her zombie servant, Baron Saturday (who was also her late lover). It is at this time that Magrat finds out that Emberella has two Fairy Godmothers, Magrat and Lilith. It was Lilith who had manipulated many of the various stories that the Witches had traveled through and who was now manipulating Genua itself, wrapping the city around her version of the Cinderella story. Lilith has had people arrested for crimes against stories, including the arrest of a toymaker for not being jolly, not whistling and not telling the children stories. At this point it is revealed that Lilith is actually Lily, Granny Weatherwax's older sister.

Using hypnosis, Granny convinces Magrat to attend a Masked Ball in place of Emberella. Greebo is transformed into human form to aid the witches. Emberella's dress fits, but the glass slippers do not. After enjoying themselves for a while at the ball, the witches are discovered and are cast into a dungeon.

At that point, Emberella, Mrs. Gogol and Baron Saturday arrive at the Ball, having broken the witches out of their prison. A high concentration of Magic causes the Duke to revert to his frog form, and he is trampled by Baron Saturday causing Lilith to flee. Granny starts to follow, but Mrs. Gogol tries to stop her using a voodoo doll, wanting to kill Lilith. Granny uses Mrs Gogol's own belief in the power of the voodoo doll to make the voodoo doll burst into flames when Granny thrusts her own arm into a flaming torch. Granny Weatherwax then pursues Lilith. Emberella is informed that, as the daughter of the late Baron Saturday, (who was the former Duke in Genua), she is now ruler of Genua. Her first command is to end the Ball, (she dislikes them,) and attend the Mardi Gras parade, a form of binge drinking carnival.

Granny manages to defeat Lilith by trapping her in a mirror, and the three Witches return home. Granny shows Magrat how to use the wand to do magic, that it takes more than wishing. Magrat throws the wand into a river, to be lost forever. Then the Witches go home, the long way, and see the elephant.