The Wee Free Men: Book 7 in the The Witches arc. 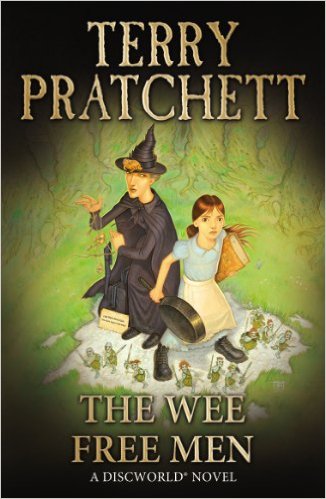 A nightmarish danger threatens from the other side of reality . . .

Armed with only a frying pan and her common sense, young witch-to-be Tiffany Aching must defend her home against the monsters of Fairyland. Luckily she has some very unusual help: the local Nac Mac Feegle – aka the Wee Free Men – a clan of fierce, sheep-stealing, sword-wielding, six-inch-high blue men.

Together they must face headless horsemen, ferocious grimhounds, terrifying dreams come true, and ultimately the sinister Queen of the Elves herself . . .

Tiffany Aching is a 9-year-old girl who literally sees things differently than others. While playing near the river near her home, she sees two tiny blue, kilted men who warn her of a "green heid" in the water. Suddenly a vile green monster appears in the water. Using her brother Wentworth as bait for it, she ambushes the beast and cracks it with a frying pan, while Wentworth is completely unfazed, as he is unable to see either the little men or the monster. She goes into town to visit a traveling teacher and comes upon Miss Tick, a witch who has been watching her. Tiffany is told that these little men are the Nac Mac Feegles, who are rough and rowdy fae folk who speak with Glaswegian accents. Miss Tick informs her that she is likely the witch of the wold she resides in, and gives her the toad familiar she carries as a guide before tricking Tiffany out of the tent and disappearing.

Tiffany returns home to discover that the Nac Mac Feegles are not only incredibly fast and strong, but afraid of her, as she catches them stealing eggs from under a chicken and a sheep right out of the field. Her brother Wentworth was kidnapped by The Queen of the Fairies. Tiffany seeks out the help of the Nac Mac Feegles to rescue him, as they are the most powerful otherworldly things she knows and they're more than willing to submit to her will, terrified by one who is not only a witch but one who can read and write. Rob Anybody, and a group of other Feegles including Big Yan and Daft Wullie back to their home where they meet the buzzard-aviator Hamish, the bard-Feegle William, and their clan leader the Kelda. Tiffany is told that her brother has been taken by the Queen to her domain in Fairyland, and not only must she take the Feegles to go rescue him, but she must also take up the reins as Kelda, as the current one is about to die. After worming her way out of marrying Rob Anybody, Tiffany goes out of the mound to the field where the Feegles test her First Sight and Second Thoughts by letting her find the entrance to the queen's domain.

Once in, Tiffany and the Feegles face several large wolves who the Feegles handily clobber, and several dream-causing blob-people called dromes. Going through drome-caused dreams, she finds the land's Baron's son Roland. Tiffany and Roland go through several dreams and the normal dreamscape to eventually find a dream with both Wentworth and the Queen in it. Tiffany narrowly escapes defeat at the hands of the Queen's dream-minions by having Roland release the Feegles from their trapping in a large walnut, and they escape from that dream into one of Tiffany's imagining. Once in that dream, the Feegles and Wentworth are presumed to have perished at the hands of the Queen's trickery, and Tiffany escapes with Roland's unconscious body out back into the dreamscape, heading for the exit, full of regret that she couldn't save her friends. The Queen mocks her inability to save them and her insecurities, but Tiffany reconnects with her homeland's heritage to gain the strength to defeat the Queen at her own game of dreams in the darkest hour. It's revealed by the Feegles who she later meets back up with that the trap the Queen had set wasn't nearly enough to stop the Feegles, and that they and Wentworth are both fine. Tiffany, Roland, Wentworth and the Feegles all return to their homeland, where the Baron mistakenly gives his son all of the credit for saving them, which Tiffany ends up being okay with.

Another large influence on the narrative of the story and development of Tiffany's character is her Granny Aching, a hard working, silent, and knowledgeable shepherd. She was the book's definition of a witch; one who keeps the balance of wealthy and poor in the community, keeps the peace, and makes sure that those in charge don't take advantage of those who are not. Stories and memories of her are mentioned here and there in the book, and her memory helps Tiffany defeat the Queen at the end.