The Truth: Book 2 in the Industrial Revolution arc. 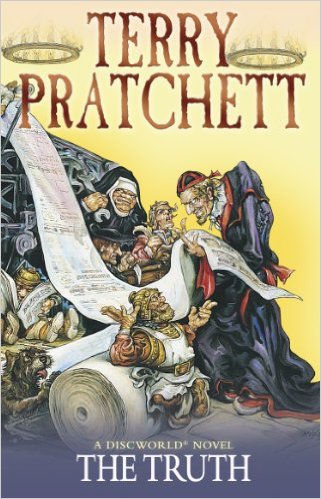 William de Worde is the accidental editor of the Discworld's first newspaper. New printing technology means that words just won't obediently stay nailed down like usual. There's a very real threat of news getting out there.

William de Worde is the black sheep of an influential Ankh-Morpork family, scraping out a humble lifestyle as a common scribe and making extra pocket money by producing a gossipy newsletter for foreign notables.

Meanwhile, a conspiracy is afoot in the city to depose the Patrician, Lord Vetinari. The wealthy and powerful (but anonymous) Committee to Unelect the Patrician hire Mr. Pin and Mr. Tulip, a pair of villainous mercenaries from outside Ankh-Morpork known as the New Firm, to frame Vetinari with a staged embezzlement. Pin and Tulip manage to catch off-guard the normally impassible Patrician with Charlie, a witless Vetinari look-alike that they had previously kidnapped and forced to collaborate. The plan starts going south, though, when Drumknott, Vetinari's clerk returns in middle of the scene and the New Firm is forced to stab him and render Vetinari unconscious, hoping to also frame him for murder; their efforts are hampered by Lord Vetinari’s prized terrier, Wuffles, who manages to escape, not before having bitten Mr. Pin.

William makes the mistake of advertising a reward for information leading to Wuffles' recovery. Realising that the job is much harder than their employers had initially suggested, the New Firm decides to skip town, not without extorting from their employers's zombie lawyer and representative Mr. Slant their promised payment and a big "bonus" in jewels, using compromising previous voice recordings captured with a dis-organiser Mk II.

An anonymous tipster named "Deep Bone" (actually Gaspode, the talking dog who operates as the brains of the beggar crew who sell the Times) helps William track down Wuffles and "translate" his testimony, giving William the last pieces of the puzzle. In the meantime, Sacharissa accidentally discovers the New Firm’s hideout in William’s own family manor and is captured by the pair of thugs —who had returned to dispose of Charlie. They head back to the Times hoping to exchange her for Wuffles and then, silence all witnesses. In the ensuing struggle a lamp explodes and the Times' offices catch fire.

William and the others manage to escape outside while Pin and Tulip hide in the cellar. Hot melted lead from the destroyed printing press leaks down on them through the roof, and Pin resorts to murdering his partner so that he can save himself by standing on the much larger man’s corpse. Pin, now only partially sane, emerges from the cellars and attacks William once the fire is out, only to be killed when he is impaled on the memo spike from William’s desk. From the criminal's body, William retrieves the fortune in jewels, the dis-organiser, and the last bit of evidence: Wuffles' bite marks on Pin's leg.

However, with the press and office destroyed, it seems like the Times will not be able to go live with their break-out reportage in time. The liberal application of a crossbow wielded by a daring Saccharisa, dwarven axes, bribery in jewels, and Otto’s sense of dramatic atmosphere helps the crew “borrow” one of the Inquirer’s presses for the evening. The big story breaks the next day and Lord Vetinari’s name is cleared just before a new, Guild-controlled Patrician would have seized power.

The New Firm, meanwhile, discuss the finer points of reincarnation, and who does and does not merit it, with Death.

After the recordings on the dis-organiser help William discover the identity of the man behind the Committee to Unelect —his own estranged father, Lord de Worde, he decides to confront him. A tense argument, blackmail with the threaten of exposure, a life's worth fortune in jewels and the less-than-tender ministrations of Otto fail to intimidate De Worde into leave the city in exile as William demands. However, after learning that his machinations nearly ended killing his own son, he admits defeat and walks away.

In the end William is ambivalent about the new and unexpected role of the free press in his life and in the world, but resolves that someone must tell the public the truth about what goes on in the city, even if the public doesn't want to hear it. The Times comes to be recognized, if not exactly welcomed, by the powers that be in the city, and William and Sacharissa make plans to expand even further, hiring new staff, establishing offices in other cities, and hopefully one day squeezing in time for a lunch date in between deadlines.