The Thief of Time: Book 5 in the Death arc. 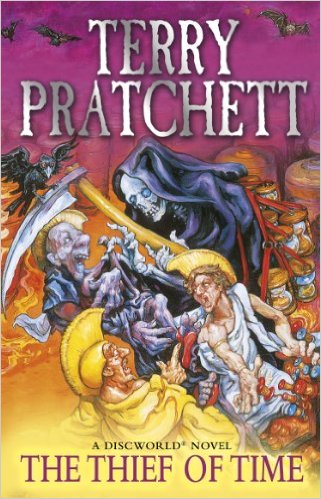 The Thief of Time

Time is a resource. Everyone knows it has to be managed. You mess with it at your peril. You can let it move fast or slowly but what you mustn't do is allow it to stop.

On the Discworld time management is the job of the Monks of History, who store it and pump it from the places where it's wasted (like the underwater - how much time does a codfish need?) to places like cities, where there's never enough time.

But the construction of the world's first truly accurate clock starts a race against, well, time for Lu Tze and his apprentice Lobsang Ludd. Because it will stop time. And when time stands still, everything stops with it. Then, there really is no future.

The Auditors are really upset because the human race (although this appears to include all races on the Discworld, not just the humans) are living their lives in - what the Auditors consider to be - an unpredictable (and therefore not understandable) way. To fix this matter once and for all, they decide to convince a young clock maker, Jeremy Clockson, in Ankh-Morpork to build a perfect glass clock. They do not reveal that this will imprison Time (the anthropomorphic personification) and thereby freeze time (the physical quantity) on the Discworld. By freezing time, the Auditors intend to eliminate the unpredictability that humans cause through their everyday actions (and have enough time, for once, to file all the paperwork). Death discovers their plans, but is unable to act directly because he cannot see - and interact with - Time (the anthropomorphic personification). Instead, Death sends his granddaughter Susan to stop them, assisted (apparently) by the Death of Rats and Quoth the Raven.

Meanwhile, in a distant valley, a young apprentice of the History Monks, Lobsang Ludd, is apprenticed to Lu-Tze, known throughout the Oi Dong Monastery as 'The Sweeper'. Following a highly impressive patch-up job with time (the physical quantity) by Lobsang, he and Lu-Tze are brought before the Abbot, where they hear that a glass clock is being built. Lu-Tze knows of such a clock's side-effects, since he was sent to prevent a previous clock from being built in Überwald. However, due to the difficulties inherent in Überwald (including the difficulty in determining which specific bolt of lightning hitting which castle might start the glass clock) he failed to stop the original - but Time only froze for a moment before a glass spring snapped and caused the clock to shatter. Having figured out that the new glass clock would be likely built in Ankh-Morpork, Lu-Tze and Lobsang head for the city to try to stop Jeremy from building it.

The Auditors end up using one of their own as an agent when contacting Jeremy. Myria LeJean takes a human form and becomes quite disturbed by "her" experiences as "she" becomes more human and individual, as opposed to the collective Auditors. As she begins to understand more about humans, she opposes the activation of the clock and finds ways to delay its creation. This annoys the other Auditors who create human bodies of their own and - naming themselves after colours - they prevent Myria from smashing the clock with a hammer, and organise a localised storm, a bolt of lightning hits Jeremy Clockson's workshop and the clock is started. Lobsang Ludd is just smashing his way through the window of the workshop at the moment the clock starts, having been delayed when he went back to help Lu-Tze, but he is too late to stop it.

However, Lobsang is able to continue moving. He meets Susan Sto Helit (whose own attempts to stop the clock being started were less successful) and finds out after his time-storer stops spinning, that, as a creature not limited by time, he was not affected by the starting of the glass clock. Meeting up with Myria LeJean, they work to correct the problem and fight the Auditors. Since Myria is no longer part of the Collective hive mind of the Auditors, Susan suggests she change her name to Unity - which she likes.

Susan and the newly named Unity discover that Lobsang Ludd and Jeremy Clockson seem to share an astonishing mental connection. When Lobsang speaks, Jeremy (who was knocked unconscious by the lightning that started the clock and whose body was moved away from the Auditors by Myria/Unity) attempts to form the same words, despite his comatose state. Susan is able to shed light on this when she reveals that she met the midwife who brought Lobsang and Jeremy into the world - none other than the "best midwife in the world" - Nanny Ogg. Nanny has told her that she delivered two boys an instant apart and Susan realises that both Lobsang and Jeremy are the same person.

Lobsang and Jeremy become infused, although they are nothing more than blue mist to begin with. Susan continues to call the mist Lobsang, since she is told that "Lobsang had the better memories". Using chocolate, Susan, Unity and a re-animated Lu-Tze kill a number of Auditors (the taste sensation of chocolate literally blows them away) and Lobsang is able to destroy the clock, freeing Time and unfreezing time. He then meets with his mother, Time, and his father, Wen the Eternally Surprised (the first Abbot of Oi Dong monastery and founder of the History Monks) before effectively taking over Time's job. He attempts to learn Lu-Tze's fifth surprise (an ongoing theme in the novel as the sweeper refuses to tell him), after which he is defeated in the iron dojo by Lu-Tze, but passes his training anyway and becomes a sweeper. He asks Lu-Tze's advice about Susan and he returns to Ankh-Morpork, where the two have an unspecified "perfect moment."

Throughout the story, Death is trying to round-up the other Horsemen of the Apocalypse, War, Famine and Pestilence, none of whom want to join up. The Fifth Horseman - Ronnie Soak (originally called Kaos - Soak spelled backwards - as in Chaos) who left before they became famous - agrees to join Death in the fight against the Auditors, and the other three also arrive as the battle prepares to start. Kaos is useful due to his sword of chaos, which goes against the rules and though flaming, is used to keep his milk cool. An Angel with an Iron book appears during the battle. It is not explained who won the fight, but since Death (at least) appears in books set chronologically later it can only be assumed that the Horsemen triumphed.