The Shepherd's Crown: Book 11 in the The Witches arc. 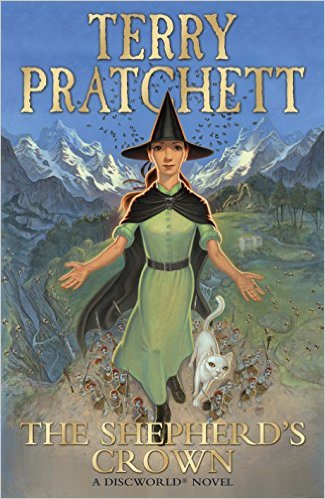 A SHIVERING OF WORLDS

Deep in the Chalk, something is stirring. The owls and the foxes can sense it, and Tiffany Aching feels it in her boots. An old enemy is gathering strength.

This is a time of endings and beginnings, old friends and new, a blurring of edges and a shifting of power. Now Tiffany stands between the light and the dark, the good and the bad.

As the fairy horde prepares for invasion, Tiffany must summon all the witches to stand with her. To protect the land. Her land.

Tiffany Aching, now in her late teens, is busy running her steading and taking care of the people of the Chalk. Jeannie, the Kelda of the Nac Mac Feegle, is worried that she’s overworked. When Granny Weatherwax, Tiffany’s mentor, dies, she leaves everything to Tiffany, who becomes the first among equals of the witches.

Geoffrey, the third son of Lord Swivel, is well educated and a pacifist. He is dissatisfied with hunting practices he considers barbaric, and after a confrontation with his father, heads towards Lancre, intending to become a witch.

Meanwhile, in the domain of the Elves, Peaseblossom senses that the passing of Granny Weatherwax has weakened the barriers between the realms. When a goblin shows the faerie court what the humans are capable of with iron and the status that goblins have achieved, Peaseblossom usurps the Queen, intending to reenter the human world and reestablish the elves’ power.

Tiffany, spread thin tending to the Chalk and Granny Weatherwax’s old steading, employs Geoffrey as a backhouse boy and starts teaching him. He and his goat get on well with everybody, and Tiffany dubs him a calm-weaver. Intending to help old men have some autonomy, he introduces the idea of sheds.

Nightshade, the former Queen of the Elves, having had her wings ripped off and ejected through the stone circle on the Chalk, is found by the Feegle stationed at the stone circle. They restrain her until Tiffany arrives and takes her in on her family farm. While there, her father gives her a shepherd’s crown, or fossilised Echinoid, that had been in the Aching family for many generations. Tiffany attempts to teach Nightshade what it is to be human and the motivations of kindness.

Tiffany gathers the witches to prepare for an invasion by the Elves. Geoffrey marshals the old men, and assembles a fighting force. Tiffany and Geoffrey attempt to enlist the help of the Elf King, and when that fails, they build him a shed in the hope that it will earn his allegiance.

The elves break through at two stone circles: up in Lancre and down in the Chalk. In Lancre, they are met by the assembled witches with help from Geoffrey and the men and they are defeated. In the Chalk, they are met by Miss Tick, Letitia, Tiffany, and the Nac Mac Feegle. Nightshade, with her glamour restored, fights for Tiffany, who she now considers a friend, until she is killed by Peaseblossom. The elves seem to have the upper hand until Tiffany, wearing the shepherd’s crown, calls the power of the Chalk to bring a storm and commands the ghosts of her grandmother's sheepdogs, Thunder and Lightning. She summons the King of the Elves, who kills Peaseblossom, and she banishes the elves from the Land.

Tiffany decides to devote herself to the Chalk. She recommends that Geoffrey be given Granny Weatherwax’s steading, and builds herself a hut on the site of Granny Aching’s hut, using the same wheels.