The Fifth Elephant: Book 5 in the The Watch arc. 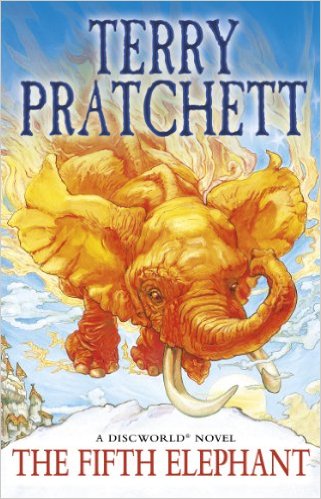 They say that diplomacy is a gentle art. That mastering it is a lifetime's work. But you do need a certain inclination in that direction. It's not something you can just pick up on the job.

A few days ago Sam Vimes was a copper – an important copper, true – chief of police – but still, at his core, a policeman. But today he is an ambassador - to the mysterious, fat-rich country of Uberwald. Today, Sam Vimes is also a man on the run.

He has nothing but his native wit and the gloomy trousers of Uncle Vanya (don't ask). It's snowing. It's freezing. And if he can't make it through the forest to civilization there's going to be a terrible war.

There are monsters on his trail. They're bright. They're fast. They're werewolves - and they're catching up.

The Ankh-Morpork City Watch is expanding; there is now a Traffic department with traffic cameras implemented using iconograph technology and a wheel clamping team, and the clacks is beginning to replace homing pigeons for communications between officers. The Watch is also investigating the theft of the replica Scone of Stone (a parody of the real-life Stone of Scone) from the Ankh-Morpork Dwarf Bread Museum. (The Scone of Stone in the novel is kept under close guard in a dwarf mine in Überwald, and will form a vital part of the forthcoming coronation ceremony of the dwarfs' new Low King.)

Samuel Vimes, Commander of the Ankh-Morpork City Watch and Duke of Ankh, is sent to the remote region of Überwald as an ambassador to take advantage of the coronation to negotiate with the new Low King on increased imports of fat. (Underground fat deposits are abundant in Überwald as a fifth discworld-supporting elephant impacted there in prehistoric times, according to legend.)

Überwald is also the traditional home of the Disc's dwarfs who are about to enthrone a new Low King. A cabal of local werewolves seek to exploit this opportunity to destabilize the already deeply divided dwarf society. They instigate the apparent theft of the real Scone of Stone from its closely guarded cave, hoping to cause a civil war between traditionalists and progressive dwarfs and isolate the country under the werewolves' feudal leadership.

In his official capacity as ambassador Vimes meets the leaders of the local vampires, werewolves and dwarfs, starting to investigate the planned putsch along the way. Meanwhile, back in Ankh-Morpork, Angua learns that Wolfgang, her werewolf brother, is the head of the conspiracy and sets out to Überwald to stop him. Consequently, Carrot also abandons the Watch and pursues her across the country, leaving an overburdened Colon as acting captain.

As captain, Colon becomes increasingly strict and paranoid, punishing other members of the watch for minor offences which they did not commit, such as demoting Constable Visit to Lance Constable for supposedly stealing a sugar lump. In response Corporal Nobby Nobbs sets up the Guild of Watchmen in protest. The other members of the Watch join and protest against Colon, but eventually it dwindles to just Nobby, Visit, zombie Constable Reg Shoe and golem Constable Dorfl.

The Ankh-Morpork City Watch recover the replica Scone of Stone. It is undamaged, but they suspect that someone has made a replica of the replica. In Überwald, Vimes extends his activities to include an unofficial investigation into the theft of the real Scone of Stone. He rapidly determines that the dwarfs' system of guard on it is nothing like as secure as the dwarfs think it is and that the Scone could have been stolen in a number of different ways without too much difficulty, but nevertheless later concludes that it was not in fact stolen, but destroyed in situ and its remains concealed by mixing them with the sand on the floor of the cave.

Following an attempt on the designated Low King's life, Vimes is imprisoned by the dwarfs but escapes. On the run across the wintry countryside he is chased by the conspiring werewolves. Carrot and Angua arrive just in time to save Vimes from the murderous pack.

Vimes' wife has been taken to the castle of Angua's werewolf family, so the commander and his entourage set out to save her. Managing to defeat the power-hungry Wolfgang, they are also able to restore the Scone of Stone.

Back in their embassy the Morporkians are once more attacked by Wolfgang. In a final stand-off, he resists arrest and is killed by Commander Vimes with a Clacks flare. With the Low King's regalia returned, the enthronement ceremony finally takes place, and Vimes is granted prime rates for fat imports to Ankh-Morpork, thus fulfilling his original mission.

The book finishes with Carrot and Angua returning to Ankh-Morpork. Carrot takes back his old rank of captain, returning Colon to his duties as a sergeant and ordering him and Nobby to gather the rest of the Watch together.