The Colour Of Magic: Book 1 in the Rincewind arc. 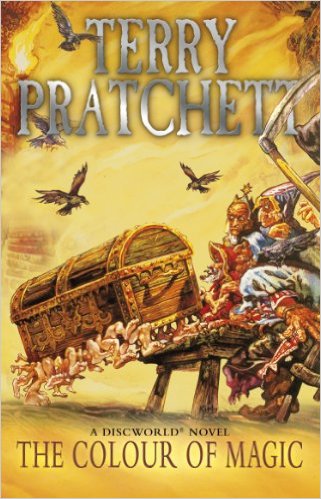 The Colour Of Magic

In the beginning there was…a turtle.

Somewhere on the frontier between thought and reality exists the Discworld, a parallel time and place which might sound and smell very much like our own, but which looks completely different. Particularly as it’s carried though space on the back of a giant turtle (sex unknown). It plays by different rules.

But then, some things are the same everywhere. The Disc’s very existence is about to be threatened by a strange new blight: the world’s first tourist, upon whose survival rests the peace and prosperity of the land. Unfortunately, the person charged with maintaining that survival in the face of robbers, mercenaries and, well, Death, is a spectacularly inept wizard…

The main character is an incompetent and cynical wizard named Rincewind. He involuntarily becomes a guide to the rich but naive tourist from the Agatean Empire, Twoflower. Forced to flee the city of Ankh-Morpork to escape a terrible fire caused by a bartender who misunderstood the concept of insurance, which Twoflower told him about, they begin on a journey across the Disc. Unknown to them, their journey is controlled by the Gods playing a board game. Rincewind and Twoflower are controlled by the Lady and are pitted against the champions of Zephyrus, the god of slight breezes, Fate, and Offler the Crocodile God in the game supervised by Blind Io, an obvious take on Thor/Zeus/Jupiter.

Twoflower and Rincewind face a mountain troll summoned by Offler and are separated. The ignorant Twoflower ends up being led to the Temple of Bel-Shamharoth, and after a near brush with Death, Rincewind ends up in a tree-nymph-inhabited tree in the woods. Rincewind escapes when the tree-nymphs try to kill him and is reunited with the tourist. Together with Hrun the Barbarian they escape from the Temple of Bel-Shamharoth the Soul Eater, which collapses. This is shown in the Gods' game as the Lady winning by beating Fate, her last opponent. Later, Hrun agrees to travel with and protect Twoflower and Rincewind in exchange for Heroic pictures of him from Twoflower's magical picture box.

They visit Wyrmberg, an upside-down mountain which is home to dragons that are summoned by their riders imagining them. The names of the dragons' riders feature punctuation in the middle (parodying the Dragonriders of Pern series by Anne McCaffrey). The three are captured by the riders and separated; Twoflower, because of his fascination with dragons, is able to summon one greater than those of the Wyrmberg riders and meets Greicha, the now-dead Wyrmberg's previous ruler. Rincewind finds Kring, Hrun's sentient sword, and later fights Lio!rt, one of Greicha's sons. He is saved from death by Twoflower and his dragon. Hrun meanwhile meets Liessa, Greicha's daughter, who convinces him to go through three trials so that he may rule the Wyrmberg alongside her. Hrun passes the first two trials: an assassination attempt and combat with both of Liessa's brothers. Before he can start the third, implied to involve sex with Liessa, he is rescued by Twoflower, much to his annoyance. Hrun subsequently leaves the group to live with Liessa, while Rincewind and Twoflower end up far away from the Wyrmberg.

They nearly go over the waterfall on the edge of the Disc, but are rescued and taken to Krull, a city perched on the very edge of the Discworld and inhabited by hydrophobic wizards. The Krullians wish to discover the gender of Great A'Tuin, the giant turtle who carries the Discworld through space, so they have built a space capsule to launch over the Edge. They intend to sacrifice Rincewind and Twoflower to get Fate to smile on the voyage, Fate insisting on their sacrifice in revenge for their role in his loss of the game. Instead, Rincewind, Twoflower, and Tethis the sea troll hijack the capsule and are launched off the Disc themselves. The story segues immediately into the beginning of The Light Fantastic; the two books can therefore be seen as one two-volume novel.