The Amazing Maurice And His Educated Rodents: Book 1 in the Misc arc.

Misc - The Discworld is a fantastic series. However reading it in order of publication is generally ill-advised. We recommend the Watch arc for a more mature read and the Witches for the younger audience.

Back to Misc's Reading Order 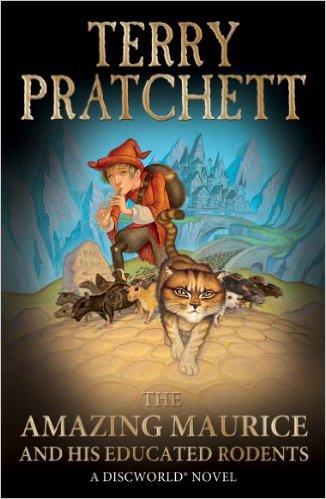 The Amazing Maurice And His Educated Rodents

Every town on Discworld knows the stories about rats and pipers, and Maurice – a streetwise tomcat – leads a band of educated ratty friends (and a stupid kid) on a nice little earner. Piper plus rats equals lots and lots of money.

Until they run across someone playing a different tune.

The Amazing Maurice is a sentient cat who leads his "Educated Rodents", a group of sentient rats, as they go from town to town posing as a plague so that their accomplice, a teenage human piper named Keith, can "lure them all away" from the town, after which they share the money the piper receives. The rats had gained intelligence from eating the waste from the rubbish tip behind Unseen University; Maurice gained it after eating one of the rats, before he was capable of realizing that they were no longer normal rats.

The group is not completely happy; the leader of the rats, Hamnpork, despises Maurice, while Dangerous Beans (they chose names based on the labels they could read before they could comprehend), a near-blind albino rat who guides them like a guru, wants to start a rat civilization – both he and Peaches, the group's scribe, find their trickery unethical. The rats are seeking the ideal of humans and rats living together, following the example of their sacred book Mr Bunnsy Has an Adventure. They agree to do one last job, in the town of Bad Blintz, in Überwald.

The rats set about planning their offensive, led by Darktan, the head of the Trap Disposal Squad, while Maurice and Keith look around. They are surprised to find that while the buildings are expensively built, the people have little food, and rats are hunted far more viciously than anywhere else. Maurice and Keith meet Malicia, the mayor's daughter, who is a story teller, and sees everything in the context of fairy tales. She soon discovers that Maurice can talk, and meets Sardines, a tap-dancing rat who is the most daring of the group. While talking to her, Maurice reveals that the rat catchers have been passing off bootlaces as rat tails.

As they set off to look in the rat-catchers' house, the rats discover many rat tunnels, which are empty, save for traps and poison. The two groups meet in the rat catchers' den, where they have been storing the food the rats are thought to have eaten, and find cages where the rats are being bred for coursing.

Darktan's group is successful in rescuing a severely injured Hamnpork, though Darktan finds himself in a trap. After a near-death experience, he escapes. Hamnpork dies, Darktan assumes leadership and sets out after Dangerous Beans and Peaches. Maurice gives in to his conscience and is also seeking them, but the voice drowns out his thoughts. Malicia and Keith, after gaining freedom, trick the rat catchers into revealing their secret. The rat catchers have created a powerful rat king named Spider – eight rats, tied together at the tail, who make a single mind with power over others.

Spider is interested in Dangerous Beans; other rats he can control, but Dangerous Beans has a mind similar to his: one that thinks for others. Dangerous Beans refuses Spider's offer of jointly ruling, as Spider wants to wage war on humans. Spider tries to destroy Dangerous Beans' mind; this is felt by his army of rats and Maurice. Dangerous Beans is able to resist, but Maurice reverts to being a cat, and pounces on the rat.

Though Spider is defeated, there is still a problem remaining: the rat piper is due to arrive the next day. The rats set about rounding up the "keekees" (non-intelligent rats). When the piper arrives, Keith challenges him to a duel. His pipe was broken by the rat catchers, so Keith uses a borrowed trombone in the duel and makes Sardines dance. When the piper starts to play his magical pipe, the rats avoid being charmed by keeping their ears stuffed and the keekees can't respond, being locked in their cages.

The piper calls Keith aside, and tells him the tricks of the trade: the pipe contains a hidden slide position for a trick note that drives rats away, the stories about him are made up so people will be scared into paying. Keith and the piper then lead the keekees out of town – Keith wants to maintain the story of the piper and the rats want a convenient way to set the keekees free.

Once that has been done, the rats emerge, offering to tell the humans where to find the stolen food and money, in return for living peacefully with them. Keith stays on as the town's piper and the town becomes a tourist attraction where everybody remarks on how "clean" the place is and marvels at the "well trained rats". It is then noted that the people don't seem to have learned a lesson from this, as they return home and continue laying traps and poison. Maurice moves on, being unwilling to settle in one place at a time, and looks to find another human to "coach".