Snuff: Book 8 in the The Watch arc. 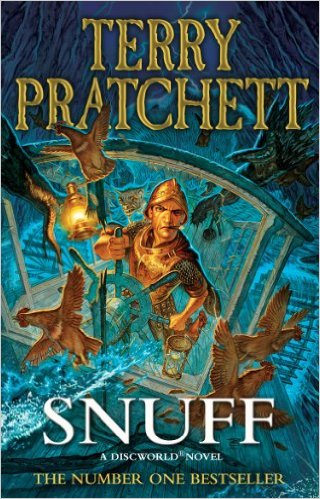 This is the countryside, after all. Everyone sees where you go and you never know who is behind a hedge.

And if you're very unlucky, the person behind the hedge could have very unfriendly intentions. It may look idyllic, but the countryside isn't all flowers and thatched cottages and bracing walks in your best tweed. Beneath the greenery lies a dark underbelly, and there's something about rambling country houses that attracts dastardly plots and grisly murder. A challenge for any detective, but especially for one bred in the city who doesn't understand the Way Things Are Done. In the countryside, people know their place, and everyone else's place too, especially if it's beneath their own. And they have some rather old fashioned ideas about people who are different from them.

Commander Vimes is persuaded by his wife and Lord Vetinari to take a family holiday back to Sybil's roots in the countryside; Wilikins, Vimes's thug-turned-butler, accompanies them. As Vimes arrives in the countryside, despite the silence and tranquillity, he senses crime.

At a dinner with all the local 'nobs' organized by Sybil, Vimes discovers the distaste the local people have towards goblins, calling them vermin and a nuisance. At the dinner, he also meets Miss Felicity Beedle, a children's book author, and he feels that she has something she wants to tell him about a possible crime.

The next day he participates in a hand-to-hand fight with the hot-headed local blacksmith, Jethro. After Vimes wins the fight, he arranges to meet with Jethro at Dead Man's Copse on Hangman Hill at midnight, as Jethro has something to tell Vimes about the mistreatment of goblins. Lord Rust then approaches Vimes and tells him that he won't find any crimes in the country, also warning him that he has no jurisdiction outside of Ankh-Morpork.

That night, Vimes and Willikins go up to Hangman Hill to find Jethro, but instead, they find the severed finger of a goblin girl and lots of blood. The next morning, the young local constable, Feeney Upshot, arrives at Ramkin Hall to arrest Vimes for the murder of the blacksmith, who has gone missing. Vimes is considered the most likely suspect because he was in a fight with the blacksmith the night before, and he was overheard making plans to meet Jethro on Hangman Hill. However, Vimes refuses arrest, instead taking on the task of mentoring Upshot and teaching him to be a better copper, and together they start an investigation on the case.

Vimes and Upshot, led by a goblin named Stinky, find the goblins' abode in a cave. They enter into pitch-black darkness, and Vimes realizes he can see perfectly in the darkness, a skill rewarded to him by the Summoning Dark (a demon that briefly possessed him in the novel Thud!. It is implied that the 'dark' and Vimes now have a mutual respect).

In the cave he meets with the goblin chief who leads him to a goblin's corpse, the same goblin that was killed on Hangman Hill. Vimes ventures further in the cave in search of the blacksmith, but he instead finds Miss Beedle, who spends her spare time here in the cave teaching goblin girls how to read and communicate with humans.

Upshot and Vimes then pay a visit to Mr Flutter; he is known as the 'local trouble' and seems to connected with most crimes in the area. They capture Flutter, but he is unwilling to say much. Vimes then notices a cellar in his house and enters it; surrounded by darkness he is able to communicate to the Summoning Dark. From the Summoning Dark, who represents all darkness, he is able to get a witness account of what happened on Hangman Hill the other night and relays this to Flutter, who then tells Vimes that he protested against the killing of the goblin-girl, and whose murderer was a Mr Stratford, a man working for Rust.

In a series of scenes taking place back at the Ankh-Morpork City Watch as well as in the country-side, Vimes discovers that goblins are being used in slave labour on tobacco plantations in Howondaland. He also finds out that three years ago, large numbers of goblins were taken from their caves to work at the plantation. In this incident, many goblins were killed, abused and starved to death.

Wee Mad Arthur of the Ankh-Morpork City Watch flies to Howondaland to investigate and finds the plantation, where all the goblin workers are dying or already dead. He notices many huts lining the plantation and in them he finds more corpses and dying goblins.

Vimes and Upshot hear that more goblins have been taken and are now currently on their way to the plantation by river on the paddleboat The Wonderful Fanny. Vimes and Upshot secretly board the boat just as a thunder storm arrives, making the night pitch-black and the river laden with debris and deadly.

A battle ensues between Vimes and Stratford and as Stratford is knocked out and tied up. The captain of the boat loses track of the riverbends and panics. Vimes ability to see in the dark allows him to guide the boat to safety, and for this he is awarded the title 'King of the River'. Vimes, with the help of Stinky, frees the goblins who are trapped in the cargo holds.

Vimes is knocked unconscious in the storm and wakes to find himself and the boat in Quirm, everyone has survived the night. Vimes quickly discovers that the goblins, along with Stratford, have already boarded the next boat to Howondaland. Vimes boards the boat and arrests the Captain and frees all the goblins once and for all, but Stratford is not on board.

Vimes returns to his family in Ramkin Hall and together they travel to Quirm on the pleasure boat Roberta E. Biscuit. Stratford attempts to attack Vimes's son and is defeated by Vimes and handed over to the Quirm police, to be returned to Ankh-Morpork for trial. On the way the prison coach crashes, Stratford escapes and kills a guard. He is then met on the road by Willikins - who had followed the coach - and killed.

Meanwhile, Lady Sybil arranges a concert in the Ankh-Morpork Opera House, inviting the Patrician, Lady Margalotta Von Uberwald, the Diamond King of Trolls and the Low-King of Dwarves. The aim of the concert is to showcase the musical talent of one of the goblin girls taught by Miss Beedle. The dignitaries are so moved by the display they agree to enact laws which will grant goblins the same rights as other sapient creatures and protection under the law.