Ancient Civilisations - These are perhaps the most standalone of all the novels. Featuring very different localities and new casts of characters, these books help bring additional depth to the disc. Feel free to read these books in any order.

Back to Ancient Civilisations's Reading Order 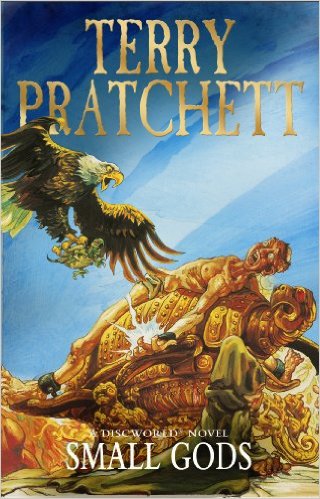 'Just because you can't explain it, doesn't mean it's a miracle.'

In the beginning was the Word. And the Word was: 'Hey, you!' This is the Discworld, after all, and religion is a controversial business. Everyone has their own opinion, and indeed their own gods, of every shape and size, and all elbowing for space at the top. In such a competitive environment, shape and size can be pretty crucial to make one's presence felt. So it's certainly not helpful to be reduced to appearing in the form of a tortoise, a manifestation far below god-like status in anyone's book.

In such instances, you need an acolyte, and fast: for the Great God Om, Brutha the novice is the Chosen One – or at least the only One available. He wants peace and justice and brotherly love. He also wants the Inquisition to stop torturing him now, please...

The Great God Om tries to manifest himself once more in the world, as the time of his eighth prophet is nigh. He is surprised, however, when he finds himself in the body of a tortoise, stripped of his divine powers.

In the gardens of Omnia's capital he addresses the novice Brutha, the only one able to hear his voice. Om has a hard time convincing the boy of his godliness, as Brutha is convinced that Om can do anything he wants, and would not want to appear as a tortoise.

Brutha is gifted with an eidetic memory and is therefore chosen by Vorbis, the head of the Quisition, to come along on a diplomatic mission to Ephebe. However, Brutha is also considered unintelligent, since he never learned to read, and rarely thinks for himself. This begins to change after Brutha discovers Ephebe's philosophers; the idea of people entertaining ideas they're not certain they believe or even understand, let alone starting fistfights over them, is an entirely new concept to him.

With the help of Ephebe's Great Library, and the philosophers Didactylos, his nephew, Urn, and Abraxas, Om learns that Brutha is the only one left who believes in him. All others either just fear the Quisition's wrath or go along with the church out of habit. While in Ephebe, Brutha's memory aids an Omnian raid through the Labyrinth guarding the Tyrant's palace. While in the library of Ephebe, Brutha also memorizes many scrolls in order to protect Ephebeian knowledge as Didactylos sets fire to the building, to stop Vorbis reading the scrolls there.

Fleeing the ensuing struggle by boat, Brutha, Om and a severely injured Vorbis end up lost in the desert. Trekking home to Omnia, they encounter ruined temples as well as the small gods who are faint ghost-like beings yearning to be believed in to become powerful. Realizing his 'mortality' and how important his believers are to him, Om begins to care about them for the first time.

While Brutha, Vorbis, and Om are in the desert, the Tyrant of Ephebe manages to regain control of the city and contacts other nations who have been troubled by Omnia's imperialistic interactions with the other countries around it.

On the desert's edge, a recovered Vorbis attempts to finish off Om's tortoise form, abducts Brutha, and proceeds to become ordained as the Eighth Prophet. Brutha is to be publicly burned for heresy while strapped on a heatable bronze turtle when Om comes to the rescue, dropping from an eagle's claws onto Vorbis' head. As a great crowd witnesses this miracle they come to believe in Om and he becomes powerful again.

Om manifests himself within the citadel and attempts to grant Brutha the honour of establishing the Church's new doctrines. However, Brutha does not agree with Om's new rule and explains that the Church should care for people while having a tolerance for other religious practices.

Meanwhile, Ephebe has gained the support of several other nations and has sent an army against Omnia, establishing a beachhead near the citadel. Brutha attempts to establish diplomatic contact with the generals of the opposing army. Despite trusting Brutha, the leaders state they do not trust Omnia and that bloodshed is necessary. At the same time, Simony leads the Omnian military to the beachhead and uses Urn's machine of war in order to fight the Ephebians.

While the fighting occurs on the beachhead, Om attempts to physically intervene, but Brutha demands he does not interfere with the actions of humans. Om becomes infuriated but obeys Brutha, but he travels to an area of the Discworld where gods gamble on the lives of humans in order to gain or lose belief. While there, Om manages to unleash his fury, even striking the other gods. This causes the soldiers to cease fighting on the battlefield, thinking it a sign from the heavens.

In the book's conclusion Brutha becomes the Eighth Prophet, ending the Quisition and reforming the church to be more open-minded and humanist. Om also agrees to forsake the smiting of Omnian citizens for at least a hundred years. The last moments of the book see Brutha's death a hundred years to the day after Om's return to power and his journey across the ethereal desert towards judgement, accompanied by the spirit of Vorbis, whom Brutha found still in the desert and took pity on. It is also revealed that this century of peace was originally meant to be a century of war and bloodshed which the History Monk Lu-Tze changed to something he liked better.