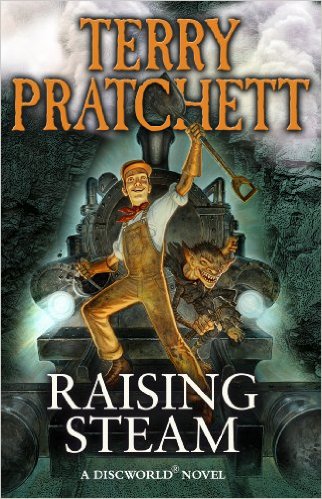 It’s all change for Moist von Lipwig, swindler, conman, and (naturally) head of the Royal Bank and Post Office.

A steaming, clanging new invention, driven by Dick Simnel, the man with t’flat cap and t’sliding rule, is drawing astonished crowds - including a few particularly keen young men armed with notepads and very sensible rainwear – and suddenly it’s a matter of national importance that the trains run on time.

Moist does not enjoy hard work. His . . .vital input at the bank and post office consists mainly of words, which are not that heavy. Or greasy. And it certainly doesn’t involve rickety bridges, runaway cheeses or a fat controller with knuckledusters. What he does enjoy is being alive, which may not be a perk of running the new railway. Because, of course, some people have OBJECTIONS, and they’ll go to extremes to stop locomotion in its tracks.

Dick Simnel, a young self-taught engineer from Sto Lat, (and whose father, Ned Simnel, appeared in Reaper Man), has invented a steam locomotive named Iron Girder. He brings his invention to Ankh-Morpork where it catches the interest of Sir Harry King, a millionaire businessman who has made his fortune in the waste and sanitation industry. Harry promises Dick sufficient investment to make the railway a success.

The Patrician of Ankh-Morpork, Lord Vetinari, wishing to ensure that the City has appropriate influence over the new enterprise, appoints the reformed fraudster turned civil servant Moist von Lipwig to represent the government in the management of the railway. His skills soon come in useful in negotiations with landowners along the route of the new line.

Throughout the story, Dwarfish fundamentalists are responsible for a number of terrorist attacks, including the murder of railway workers engaged in building the new line, and arson of towers belonging to the clacks telecommunications network. This campaign culminates in a palace coup at the seat of the Low King of the Dwarfs in Schmaltzberg, Überwald, whilst the King is away at an international summit in Quirm, over twelve hundred miles away. Vetinari declares that it is imperative to return the King to Schmaltzberg as soon as possible in order to restore political stability, and gives Moist the task of getting him there via the new railway. Moist protests impossibility on the grounds that the railway is nowhere near complete, but is told that achieving this target is non-negotiable.

On the journey, Moist and Vimes are faced by various problems, such as numerous attacks by deep-downers, a poor attempt at infiltration, a landslide, and the revelation that the Low King is in fact a pregnant female. Nevertheless, the train eventually reaches the bridge, which has been badly damaged.

Faced with a bridge that is clearly too weak to carry the train, and insufficient time or workers to strengthen it, Moist commandeers the City's ancient golems, which are kept strictly for use only in times of national emergency. This is in spite of his being expressly forbidden to use them by Vetinari (who knows that Moist has the necessary expertise to command the golems). Having tunnelled their way to the site of the bridge, the golems, concealed by mist in the gorge below, somehow contrive to carry the train safely across.

The Dwarf King retakes Schmaltzberg with little resistance, and the leader of the fundamentalists is held for trial. Feeling that the dwarfs are ready for a more progressive future, the King reveals that she is actually a Queen, and changes her name from Rhys to Blodwen, in honor of a dwarf whom had been killed by the fundamentalists at her wedding. Following this announcement, a number of other senior dwarfs also "come out" as female.

Back in Ankh-Morpork, Dick Simnel is knighted, Harry King receives a peerage, and the City Watch officers who helped defend the train receive medals, whereas Moist, upon questioning why he appears to be the only one not receiving a reward, is told that his reward is to remain alive. It is also revealed that Vetinari himself had been on the train, disguised as one of the locomotive's stokers, while his lookalike Charlie impersonated him back in Ankh-Morpork, and had surmised how the train had been carried across the ravine. However, he appears content that there is no evidence to prove this.