Night Watch: Book 6 in the The Watch arc. 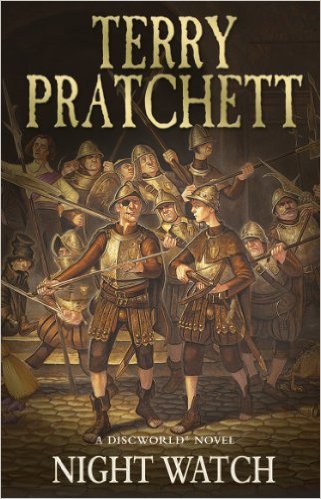 'Don't put your trust in revolutions. They always come round again. That's why they're called revolutions. People die, and nothing changes.'

For a policeman, there can be few things worse than a serial killer loose in your city. Except, perhaps, a serial killer who targets coppers, and a city on the brink of bloody revolution.

For Commander Sam Vimes, it all feels horribly familiar. He’s back in his own rough, tough past without even the clothes he was standing up in when the lightning struck. Living in the past is hard. But he must survive, because he has a job to do. He must track down the murderer and change the outcome of the rebellion.

A Discworld Tale of One City, with a full chorus of street urchins, ladies of negotiable affection, rebels, secret policemen and other children of the revolution.

On the morning of the 30th anniversary of the Glorious Revolution of the Twenty-Fifth of May (and as such the anniversary of the death of John Keel, Vimes' hero and former mentor), Sam Vimes is caught in a magical storm while pursuing Carcer Dun, a notorious criminal. He awakens to find that he has been rescued by Miss Palm (whom Vimes knows in the future as Mrs Palm, Head of the Guild of Seamstresses – seamstresses referring to prostitutes). He determines that he has somehow been sent back in time.

Vimes's first idea is to ask the wizards at the Unseen University to send him home, but before he can act on this, he is arrested for breaking curfew by a younger version of himself. Incarcerated in a cell next to his is Carcer, who after being released joins the Unmentionables, the secret police carrying out the paranoid whims of the Patrician of the time, Lord Winder.

When he is taken to be interrogated by the captain, time is frozen by Lu-Tze, who tells Vimes what has happened and that he must assume the identity of Sergeant-At-Arms John Keel, who was to have arrived that day but was murdered by Carcer. It is stated that the event which caused Vimes and Carcer to be sent into the past was a major temporal shattering. Vimes then returns to the office, time restarts and he convinces the captain that he is Keel.

Young Vimes believes Vimes to be Keel, allowing Vimes to teach Young Vimes the lessons for which Vimes idolized Keel. The novel climaxes in the Revolution. Vimes, taking command of the watchmen, successfully avoids the major bloodshed erupting all over the city and manages to keep his part of it relatively peaceful. After dealing with the Unmentionables' headquarters he has his haphazard forces barricade a few streets to keep people safe from the fighting between rebels and soldiers. However, the barricades are gradually pushed forward during the night (by Fred Colon and several other simple-minded watchmen) to encompass the surrounding streets until Vimes finds himself in control of a quarter of the city, dubbed "The Glorious People's Republic of Treacle Mine Road", with a still alive Reg Shoe as one of the leading figures.

The ruler, Lord Winder, is effectively assassinated by the young Assassin's Guild student Havelock Vetinari, and the new Patrician Lord Snapcase calls for a complete amnesty. However, he sees Keel as a threat and sends Carcer to lead a death squad of Unmentionables, watchmen and the palace guard to murder Keel. Several policemen (the ones who died when the barricade fell in the original timeline) are killed in the battle, as is Reg Shoe; Vimes manages to fight off the attack until he can grab Carcer, at which point they are returned to the future and Keel's body is placed in the timeline Vimes has just left, to tie things up, as in the "real" history, Keel died in that fight.

Vimes' son is born, with the help of Doctor "Mossy" Lawn, whom Vimes met while in the past, and Vimes finally arrests Carcer, promising him a fair trial before he is hanged. A subsequent conversation with Lord Vetinari reveals that the Patrician alone knows Vimes took Keel's place, also that he fought alongside Keel's men against Carcer's death squad. He proposes that the old Watch House at Treacle Mine Road (where Keel was sergeant, and which was destroyed by the dragon in Guards! Guards!) be rebuilt.