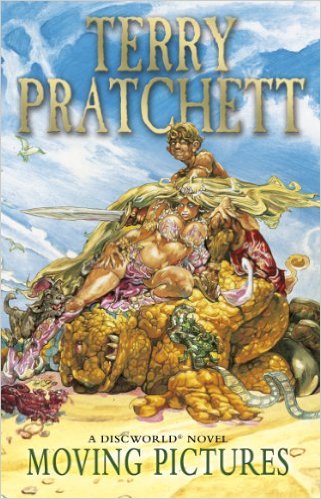 Alchemists have always thought that they can change reality, shape it to their own purpose. Imagine then the damage that could be wrought on the Discworld if they get their hands on the ultimate alchemy: the invention of motion pictures, the greatest making of illusions. It may be a triumph of universe-shaking proportions. It's either that or they're about to unlock the dark secret of the Holy Wood hills - by mistake...

The alchemists of the Discworld have invented moving pictures. Many hopefuls are drawn by the siren call of Holy Wood, home of the fledgling "clicks" industry – among them Victor Tugelbend, a dropout from Ankh-Morpork's Unseen University and Theda "Ginger" Withel, a girl "from a little town you never ever heard of", and the Discworld's most infamous salesman, Cut-Me-Own-Throat Dibbler, who introduces commerce to the equation and becomes a successful producer. The business of making movies grows rapidly, and eventually Victor and Ginger become real stars, thanks to the help of Gaspode the sentient dog (who also develops a relationship with Laddie, that everybody considers to be the real Wonder Dog, although in fact has a very simple mind). Holy Wood for a while becomes an effervescent place full of humans, dwarfs, alchemists, demons (which essentially constitute the main technological device to make movies), and trolls (among whom is Detritus) all living in harmony.

Meanwhile, it gradually becomes clear that the production of movies is having a deleterious effect on the structure of reality. Ginger is possessed by an unspecified entity and she and Victor find an ancient, hidden cinema, complete with portal to the Dungeon Dimensions. Back in Ankh-Morpork, during the first screening of Blown Away (a parody of Gone with the Wind) which the senior wizards of the Unseen University are also attending, a creature from the Dungeon Dimensions breaks through. Victor fights it (in what eventually becomes a parody of the movie King Kong also featuring the Librarian of the Unseen University), having found out that when a camera points at him he's capable of doing scenes from films in real life.

In the end most things return to normal (also because the Patrician and the wizards make it clear that they won't allow any more movies to be produced ever again), although dwarfs find themselves inexplicably singing "Hihohiho" while mining. Victor and Ginger have a last dialogue over the meaning of Holy Wood and being famous, and Gaspode and the other animals under the influence of Holy Wood lose their ability to reason and speak. The ending lines depict a poetic scene about the fragility of Holy Wood dreams.