Maskerade: Book 5 in the The Witches arc. 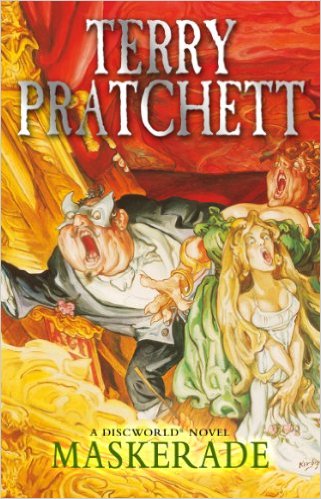 'I thought: opera, how hard can it be? Songs. Pretty girls dancing. Nice scenery. Lots of people handing over cash. Got to be better than the cut-throat world of yoghurt, I thought. Now everwhere I go there's...'

Death, to be precise. And plenty of it. In unpleasant variations. This isn't real life – it’s worse. This is the Opera House, Ankh-Morpork...a huge, rambling building, where innocent young sopranos are lured to their destiny by a strangely-familiar evil mastermind in a mask and evening dress, with a penchant for lurking in shadows, occasional murder, and sending little notes full of maniacal laughter and exclamation marks. Opera can do that to a man.

But Granny Weatherwax, Discworld's most famous witch, is in the audience. And she doesn't hold with that sort of thing. So there's going to be trouble (but nevertheless a good evenin's entertainment with murders you can really hum...). And the show MUST go on.

The story begins with Agnes Nitt leaving Lancre to seek a career at the Opera House in Ankh-Morpork. When Granny Weatherwax realizes Nanny Ogg has written an immensely popular cookbook but has not been paid by the publisher, the witches also leave for Ankh-Morpork to collect the money, as well as to attempt to recruit Agnes into their coven, to replace Magrat Garlick who left the coven when she became Queen of Lancre (in Lords and Ladies). This has the side benefit of distracting Granny from becoming obsessive and self-centered, or so Nanny believes to her great relief.

Agnes Nitt is chosen as a member of the chorus, where she meets Christine, a more popular but less talented girl. The Opera House Ghost, who has long haunted the opera house without much incident, begins to commit seemingly random murders staged as "accidents", and also requests that Christine be given lead roles in several upcoming productions. Due to her incredibly powerful and versatile voice, Agnes is asked to sing the parts from the background, unbeknownst to Christine or the audience.

Having discovered the problems at the opera house and also having coerced the publisher to pay Nanny richly for her book, the witches investigate the mystery, with Granny posing as a rich patron, and Nanny insinuating herself into the opera house staff. Agnes unmasks Walter Plinge, the janitor, as the ghost, though as he is seemingly harmless, the others are unconvinced. Another employee is suspected, but turns out to be a member of the Cable Street Particulars. The witches determine that the finances of the Opera House, which are a complete mess, have been made so intentionally in order to hide the fact that money is being stolen, with the murders being used either as a distraction or to cover evidence.

It is finally revealed that two people had been masquerading as the ghost. The original (and harmless) ghost, Walter Plinge, was being psychologically manipulated by the second ghost, Mr Salzella (Director of Music at the Opera House), who assumed the identity to commit the murders and theft. With the witches' help, Walter is able to overcome his fears and help defeat the murderer, who is killed by believing that the fencing staged in opera is actual lethal swordplay, dying despite not actually being injured. Walter then goes on to become the new Director of Music, integrating his own music into the opera, turning them into musicals.