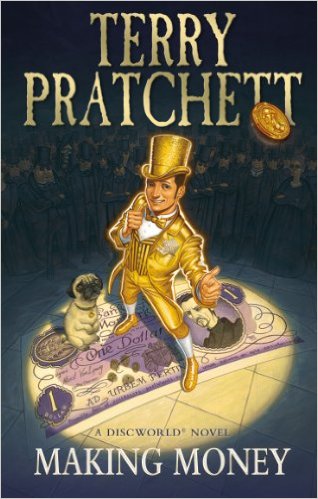 It’s an offer you can’t refuse. Who would not to wish to be the man in charge of Ankh-Morpork’s Royal Mint and the bank next door? It’s a job for life. But, as former con-man Moist von Lipwig is learning, the life is not necessarily for long. The Chief Cashier is almost certainly a vampire. There’s something nameless in the cellar (and the cellar itself is pretty nameless), it turns out that the Royal Mint runs at a loss. A 300 year old wizard is after his girlfriend, he's about to be exposed as a fraud, but the Assassins Guild might get him first. In fact lot of people want him dead Oh. And every day he has to take the Chairman for walkies.Everywhere he looks he’s making enemies.What he should be doing is . . . Making Money!

Moist von Lipwig is bored with his job as the Postmaster General of the Ankh-Morpork Post Office, which is running smoothly without any challenges, so the Patrician tries to persuade him to take over the Royal Bank of Ankh-Morpork and the Royal Mint. Moist, content with his new lifestyle, refuses. However, when the current chairwoman, Topsy Lavish, dies, she leaves 50% of the shares in the bank to her dog, Mr Fusspot (who already owns one share of the bank, giving him a majority and making him chairman), and she leaves the dog to Moist. She also made sure that the Assassins' Guild would fulfill a contract on Moist if anything unnatural happens to the dog or he does not do as her last will commands.

With no alternatives, Moist takes over the bank and finds out that people do not trust banks much, that the production of money runs slowly and at a loss, and that people now use stamps as currency rather than coins. His various ambitious changes include making money that is not backed by gold but by the city itself. Unfortunately, neither the chief cashier (Mr. Bent, who is rumoured to be a vampire but is actually something much worse) nor the Lavish family are too happy with him and try to dispose of him. Cosmo Lavish tries to go one step further — he attempts to replace Vetinari by taking on his identity — with little success. However all the while, the reappearance of a character from von Lipwig's past adds more pressure to his unfortunate scenario.

Moist's fiancée, Adora Belle Dearheart, is working with the Golem Trust in the meantime to uncover golems from the ancient civilization of Um. She succeeds in bringing them to the city, and to everyone's surprise the "four golden golems" turn out to be "four thousand golems" (due to a translation error) and so the city is at risk of being at war with other cities who might find an army of 4000 golems threatening. Moist discovers the secret to controlling the golems, and manages to order them to bury themselves outside the city (except for a few to power clacks towers and golem horses for the mail coaches) and then decides that these extremely valuable golems are a much better foundation for the new currency than gold and thus introduces the golem-based currency. Eventually, an anonymous clacks message goes out to the leaders of other cities that contains the secret to controlling the golems (the wearing of a golden suit), thus making them unsuitable for use in warfare (as anyone could wear a shiny robe).

At the end of the novel, Lord Vetinari considers the advancing age of the current Chief Tax Collector, and suggests that upon his retirement a new name to take on the vacancy might present itself.