I Shall Wear Midnight: Book 10 in the The Witches arc. 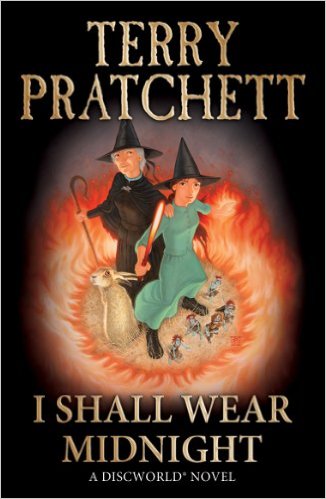 I Shall Wear Midnight

As the witch of the Chalk, Tiffany Aching performs the distinctly unglamorous work of caring for the needy. But someone – or something – is inciting fear, generating dark thoughts and angry murmurs against witches.

Tiffany must find the source of unrest and defeat the evil at its root. Aided by the tiny-but-tough Wee Free Men, Tiffany faces a dire challenge, for if she falls, the whole Chalk falls with her . . .

Tiffany is working as the Chalk's only witch in a climate of growing suspicion and prejudice: When the local Baron (for whom she had been caring) dies of poor health, she is accused of murder. Tiffany travels to Ankh-Morpork to inform the Baron's heir, Roland, who happens to be in the city with his fiancée Letitia. On the way Tiffany is attacked by the Cunning Man, a frightening figure who has holes where his eyes should be.

In the city she meets Mrs Proust, the proprietor of Boffo's joke shop, where many witches buy their stereotypical witch accoutrements. When they find Roland and Letitia the Nac Mac Feegles, who have as usual been following Tiffany, are accused of destroying a pub. Tiffany and Mrs Proust are arrested by Carrot and Angua, and (nominally) locked up - although it is mostly, in fact, for their protection as people start to resent witches.

When they are released the next day, Tiffany meets Eskarina Smith (not seen since the events of the third Discworld novel, Equal Rites), who explains to her that the Cunning Man was, a thousand years ago, an Omnian witch-finder, who had fallen in love with a witch. That witch, however, knew how evil the Cunning Man was. She was eventually burnt to death, but as she was being burned she trapped the Cunning Man in the fire as well. The Cunning Man became a demonic spirit of pure hatred, able to corrupt other minds with suspicion and hate. Esk announces that the Cunning Man is coming. Tiffany and the Feegles return to the Chalk, where they find the Baron's soldiers trying to dig up the Feegle mound. She stops them, and goes to see Roland, who throws her in a dungeon (which she locks on the inside, and where she is brought bacon, eggs, and coffee in the morning). It is later learned that the Cunning Man was responsible for these actions.

She escapes, however, and goes to see Letitia, whom she discovers is also an untrained but talented witch. She sees the Cunning Man twice while at Letitia's home, and as guests begin to arrive at Roland and Letitia's wedding, the other witches start to arrive...so that if the Cunning Man takes over her body, they can kill her. The night before the wedding, Tiffany, Roland, Letitia and Preston (a castle guard whom Tiffany has befriended) meet at one of the fields that needs to be burned to clear it of stubble; Tiffany lures the Cunning Man into the flames and defeats him.

After some discussions, the story then jumps forward a year where she is offered a beautiful black dress by Amber. We can see Preston, who is about as smart as Tiffany, showing his love for her and Tiffany reciprocating it.