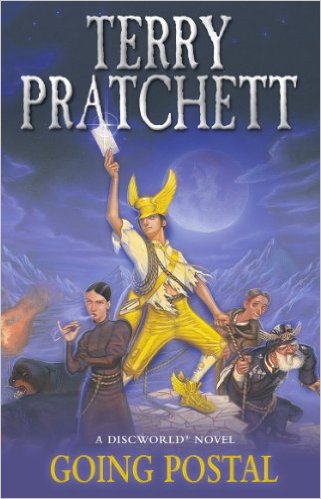 The post was an old thing, of course, but it was so old that it had magically become new again.

Moist von Lipwig is a con artist and a fraud and a man faced with a life choice: be hanged, or put Ankh-Morpork's ailing postal service back on its feet.

The post is a creaking old institution, overshadowed by new technology. But there are people who still believe in it, and Moist must become one of them if he's going to see that the mail gets though, come rain, hail, sleet, dogs, the Post Office Workers Friendly and Benevolent Society, the evil chairman of the Grand Trunk Semaphore Company, and a midnight killer.

Getting a date with Adora Bell Dearheart would be nice, too.

Perhaps there's a shot at redemption in the mad world of the mail, waiting for a man who's prepared to push the envelope...

As with many of the Discworld novels, the story takes place in Ankh-Morpork, a powerful city-state based on the historical and modern settings of various metropolises like London or New York City. The protagonist of the story is Moist von Lipwig, a skilled con artist who was to be hanged for his crimes, but saved at the very last moment by the cunning and manipulative Patrician Havelock Vetinari, who has Moist's death on the scaffold faked.

In his office, Vetinari then presents Moist with two options: he may accept a job offer to become Postmaster of the city's rundown Postal Service or he may choose to walk out of the door and never hear from Vetinari again. As exiting through the door in question would lead to a fatal drop, Moist decides to accept the job.

After a thwarted attempt at escape, Moist is brought to the Post Office by his parole officer Mr Pump, a golem. It turns out that the Post Office has not functioned for decades, and the building is full of undelivered mail, concealed under a layer of pigeon dung. Only two employees remain: the aged Junior Postman Tolliver Groat and his assistant Stanley Howler.

Meanwhile, Vetinari is holding a meeting with the board executives of the Grand Trunk Company, a company that owns and operates a system of visual telegraph towers known as "clacks". He notes that since they have taken full control, the quality of service had gone down considerably. Despite unnerving most of the board, Vetinari fails to make headway, especially with its chairman, Reacher Gilt.

As Moist attempts to revitalize the service, he discovers that a few months before taking the job, a number of his predecessors have predeceased in the building within weeks of each other in unusual circumstances. He also discovers that the mail inside the building has taken on a life of its own, and is nearly suffocated as a result.

Moist introduces postage stamps to Ankh-Morpork, hires golems to deliver the mail, and finds himself competing against the Grand Trunk Clacks line. He meets and falls in love with the chain-smoking, golem-rights activist, Adora Belle Dearheart, and the two begin a relationship by the end of the book. Dearheart is the daughter of the Clacks founder Robert Dearheart, though the company was taken away from her father and the other founders by tricky financial maneuvering. Because of this, she still has useful contacts amongst the clacks operators.

The unscrupulous Clacks chairman, Reacher Gilt, sets a banshee assassin (Mr Gryle) on the Postmaster, but only manages to burn down much of the Post Office building. The banshee dies when he gets flipped onto the space-warping sorting machine. Lipwig makes an outrageous wager that he can deliver a message to Genua faster than the Grand Trunk can. "The Smoking Gnu", a group of clacks-crackers, sets up a plan to send a Discworld equivalent to a killer poke into the clacks system that will destroy the machinery, halting the message that Lipwig will race against. Lipwig talks the Gnu out of it, and opts for a more psychological attack on the Grand Trunk, leaving the semaphore towers standing. This plan succeeds.

Gilt is soon arrested and finds himself confronting the Patrician. Offered the choice of running the mint or exiting the room, he ends up walking through the door to his death.