Carpe Jugulum: Book 6 in the The Witches arc. 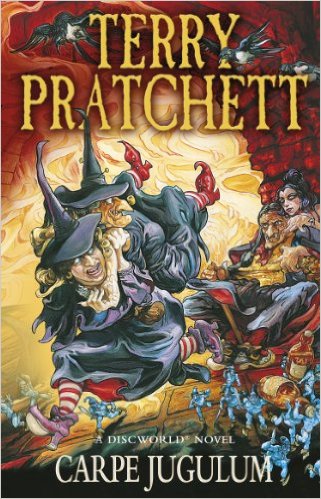 In this and indeed other lives there are givers and takers. It's safe to say that vampires are very much in the latter camp. They don’t have much time for the givers of this world – except perhaps mealtimes – and even less for priests.

Mightily Oats has not picked a good time to be a priest.

Lancre’s newest residents are a thoroughly modern, sophisticated vampire family. They've got style and fancy waistcoats. They're out of the casket and want a bite of the future. But they haven’t met the neighbours yet: between them and Lancre stand Granny Weatherwax and Nanny Ogg. And Magrat, who is trying to combine witchcraft and nappies. And young Agnes, although she is really in two minds about everything.

Mightily Oats knows he has a prayer, but he wishes he had an axe.

Count Magpyr and family are invited to the naming of Magrat and King Verence's daughter, to be conducted by the Omnian priest, Mightily Oats. During the party after the ceremony, Verence informs Nanny Ogg and Agnes Nitt that the Count has informed him that the Magpyr family intend to move into Lancre Castle and take over. Due to a type of hypnotism, everyone seems to consider this plan to be perfectly acceptable. Only the youngest witch, Agnes, and the Omnian priest, Mightily Oats, seem able to resist the vampiric mind control, due to their dual personalities. Because of her ability to resist his influence the Magpyr son, Vlad, is attracted to Agnes and makes many advances on her including trying to convince her to become a vampire.

Meanwhile, Granny Weatherwax, feeling slighted by not receiving an invitation to the ceremony, has left her cottage empty and seems to be working towards a life in a cave, almost like a hermit. After they have left the hypnotic influence of the Vampires, Agnes, Nanny Ogg and Magrat attempt to convince her to help them save Lancre, but apparently without success, even after Granny is informed that her invitation was stolen by a magpie, (which Granny actually already knew, the real reason she's retreated is because she's trying (and thus-far failing) to find a way around the Vampires' powerful minds).

So the three witches return to Lancre to take on the Count and his family without her, but because the Magpyr family have built up a tolerance for the normal methods of defeating a vampire, such as garlic, bright light, and religious symbols, this is not so easily done. Just when it seems all is lost Granny Weatherwax comes through the front door soaked to the bone and swaying with exhaustion. Nanny Ogg and Magrat use Granny's assault upon the Count as a distraction to escape, leaving Granny, Agnes and Brother Oats with the Vampires. Granny is able to get through the Counts defenses but is unable to strike him down and the Magpyrs feed on her, with the intention of transforming her into a vampire.

There is an Igor who is the servant of the Magpyrs. He is a traditionalist who spends his spare time breeding and distributing spiders for the dark corners of the castle. The Magpyrs hate him and his "more gothic than thou" attitude, as Igor tries to keep the old ways alive. Igor's impression of the current Count Magpyr is that he is too modern, whereas Igor prefers "tradithionalitht" methods of Vampirism, (all Igors have a lisp on the Discworld—although some only have it when they remember).

Nanny Ogg, Magrat and Magrat's infant daughter, Esmerelda Margaret Note Spelling of Lancre, escape with the help of the rebelling Igor, who appears to have a crush towards Nanny), but are forced to detour to Überwald and end up in the Magpyrs' castle. Agnes is kidnapped by the Magpyrs' son and their clan, who give chase by flying.

Granny Weatherwax struggles against the vampirism inside her and thrusts the pain this causes into the iron of the castle forge's anvil. She is only able to defeat the vampirism after she looks inside of herself and faces the darker side of her nature, but the struggle leaves her barely able to stand, let alone defeat the Count.

While Magrat and her daughter hide in Igor's dungeon quarters Nanny and Igor begin fighting against the Magpyrs, using the considerable stock of Holy water and other religious symbols that were originally collected by old Count Magpyr (who is described as having been "a sportsman"). Surprisingly (for the Magpyr family, at least) the old-fashioned ways to defeat vampires that they thought themselves protected against start to work again. They don't understand what the problem is, although they start to have bizarre cravings for "hot, sweet strong tea and biscuits", a combination that has them feeling quite upset (it not being their usual craving for blood.)

All is revealed when Granny, (who has helped Mightily Oats to Überwald by a process of being carried by him), tells them that - far from turning her into a Vampire - they have, instead, been 'Weatherwaxed', caused by the sharing of their blood with her. The Magpyrs find themselves unable to harm Magrat's daughter, or do anything else that Granny herself is unable to do (e.g. fly). They are even more horrified when they find out that Igor has re-awakened the old Count Magpyr, (having gone into his crypt and spilled a drop of blood on the old Count's cremation ashes), and that the people of Überwald would prefer the old Count to their new, modern type of vampirism. The Magpyrs are attacked (and presumably killed—though probably not permanently) by the citizens of Überwald and the witches return to Lancre.