A Hat Full of Sky: Book 8 in the The Witches arc. 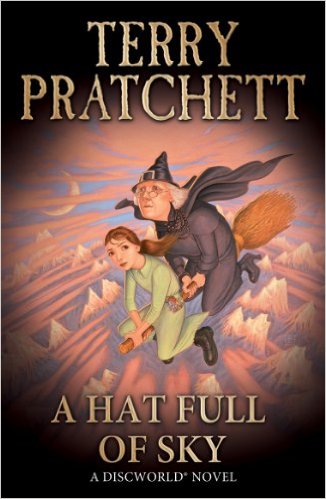 A Hat Full of Sky

Something is coming after Tiffany . . .

Tiffany Aching is ready to begin her apprenticeship in magic. She expects spells and magic – not chores and ill-tempered goats! Surely there must be more to witchcraft than this!

What Tiffany doesn't know is that an insidious, disembodied creature is pursuing her. This time, neither Mistress Weatherwax (the greatest witch in the world) nor the fierce, six-inch-high Wee Free Men can protect her. In the end, it will take all of Tiffany's inner strength to save herself . . . if it can be done at all.

A Hat Full of Sky by Terry Pratchett is a fantasy novel about a girl who is learning her place as a witch. Early in the novel, Tiffany Aching leaves her home in the chalk country (based on England's chalk country) to act as an apprentice and maid for the elderly witch Miss Level. Her former teacher, Miss Tick, who is also a witch, escorts her to the town of Twoshirts. While waiting for Miss Level to arrive, they are attacked by a hiver. The hiver cannot be killed or seen and it takes over your mind. The encounter is only for a few seconds, and then the hiver leaves but it gives Tiffany and Miss Tick a fright. Miss Level comes along on a broomstick and takes Tiffany to her cottage in the mountains.

After settling in Tiffany discovers that Miss Level has two bodies and she has a spirit who cleans her house named Oswald. After settling into the cottage, Tiffany goes to a group of apprentice witches her age with Petulia. The leader of the group is called Annagramma and many characters find her condescending and rude. Tiffany leaves the group upset after telling them about her imaginary hat. While in her room at the cottage, the hiver finds her and takes over her body and mind. At first Tiffany doesn't realize what has happened, but when she does, it is too late for her to take action. The hiver (as Tiffany) causes chaos, steals Mr Weavall's money and causes Annagramma to fear her.

Upon arrival at the cottage, the hiver kills one of Miss Levels bodies. Rob Anybody who is one of the Nac Mac Feegle (which are fairies that are very loyal to Tiffany after she previously helped them) goes into Tiffany's mind along with some of his friends to try to fight the hiver out of her mind. They decide that smells from her past will bring forth the actual Tiffany and she will be able to break free. With the help of the Nac Mac Feegle, Tiffany fights the hiver out of her mind, but she is still left with the memories of previous victims of the hiver. Mr. Weavall discovers that Tiffany stole his money, but the Feegles put gold in place of the copper he had saved up. Tiffany decides that the hiver must be dealt with so she proceeds to pursue it in the mountains. Mistress Weatherwax accompanies her although Tiffany is begrudging. They camp in the mountains and Mistress Weatherwax borrows an owl's mind to observe the hiver as it lurks close by. Mistress Weatherwax tells Tiffany to call her Granny Weatherwax.

In the morning Tiffany and Mistress Weatherwax head off to the witch trials, an annual event where witches show what they have learned. Upon arrival, Tiffany senses the hiver moving in on her and turns to Granny Weatherwax only to find that she isn't there. Panicking, she runs until she finds Granny Weatherwax who tells her it is time to face the hiver alone. Tiffany welcomes the hiver to her mind, and discovers that the hiver doesn't understand humans, it just wants to seek shelter from the world because it senses everything. Tiffany names the hiver Arthur and teaches it how to die which is its ultimate goal. She shows it the way across the desert to death. As she turns to exit the world of death, she finds that the door she entered has disappeared. Turning back around, Death confronts her but she is rescued by Granny Weatherwax.

Granny Weatherwax gives Tiffany her hat but she returns it because she wants to make her own. The novel ends on Tiffany returning to the chalk to take the place of her dead grandmother as the witch of the land. She decides to make her hat out of the sky.